By Dalene Heck and Stephanie Yoder

It has become increasingly common for brands to use celebrities and influencers to market their products, services, or destinations. These partnerships can be amazingly effective, but issues of disclosure are becoming more and more important.

Over the past few years the United States and Canadian governments have both sat up and taken notice of influencer marketing practices. FTC has brought cases against influencers, most notably these YouTubers, who deceptively endorsed an online gambling service without disclosing that they were part owners. They’ve also sent out warning letters to influencers and marketers engaging in deceptive practices. In Canada, the Competition Bureau has gone after major corporations for publishing fake reviews and levied millions of dollars in fines.

So what are the parameters around ads? It’s still a grey area, but it is getting better. It is satisfying as a consumer to know that there are watchdogs out there to protect the consumer but it is still imperative to educate yourself. The vast majority of influencers do not know the correct way to disclose a sponsored product to their audience and your brand might be the one left on the hook if things go wrong.

The FTC and the ASC: Setting Influencer Disclosure Guidelines

In the United States, advertising is regulated by the Federal Trade Commission. The FTC has a strict set of guides concerning the use of endorsements and testimonials in advertising.

While Canada technically has no equivalent agency to the FTC, consumer protection falls under the purview of the Competition Bureau. Industry standards surrounding advertising are left to a non-profit industry group called Advertising Standards Canada. In April 2018 they finally published a set of Influencer Marketing Disclosure Guidelines (which have since been updated in January of 2019).

The recommendations of both agencies are very similar and they boil down to the same key point: all relationships between brands and influencers need to be clear and conspicuous to lay audiences. 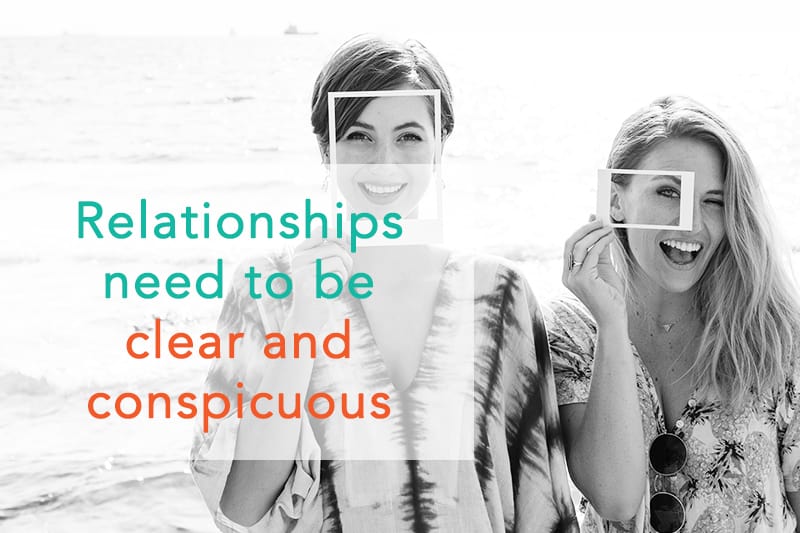 What Counts as an Endorsement?

A lot more than you’d think. The key thing to remember is that it doesn’t matter if the compensation affects the bloggers judgment, it matters if the audience might *think* it could affect their judgment. Self-proclaimed impartiality is completely irrelevant. These guidelines apply equally to blog posts, videos and all social media platforms including Twitter, Facebook, Snapchat and Instagram.

If an influencer is compensated or given something for free with the expectation that they will mention it on their blog or on social media, then that needs to be disclosed. This is true even if no explicit agreement has been made with the influencer. Oftentimes companies will send bloggers or Instagrammers products with the hope that they might get a mention – this still counts as a relationship in the eyes of the FTC.

All gifts should be disclosed, as should sponsored travel or event attendance. Samples received as part of a network marketing program should be disclosed. Even high-value items sent out for review with the expectation they will be returned later (like an expensive camera), need to be disclosed.

It’s also important to remember that an endorsement doesn’t need to be positive. Even just posting a picture of something with no text can count as an endorsement in the eyes of the FTC. If a travel blogger tags a dress she wore on Instagram, that is considered an endorsement if she has a relationship with the brand.

Aspirational posts can also count as endorsements. For example, if a destination paid bloggers to write about how they would love to visit XYZ Island, that is an endorsement even if the blogger has never been.

The FTC also strongly recommends influencers disclose contest entries (for example if a blogger writes a post about a destination as a condition of being included in a contest or sweepstakes).

If an influencer buys something themselves or gets a gift or sample outside of blogging (like a free sample from a store), that does not need to be disclosed.

In the eyes of the ASC and FTC, any sort of relationship between an influencer and a brand counts as an endorsement and warrants a disclosure. As it says in the ASC guidelines, “when in doubt, spell it out.” 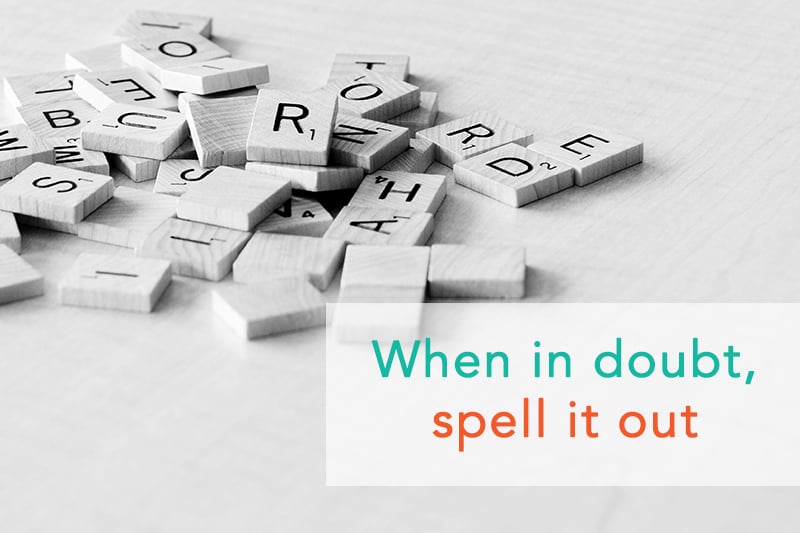 People are very worried about disclosing properly, and there is a lot of misinformation going around on what is required. Both the ASC and FTC guidelines are actually very clear on what they want.

Here is one key point where the guidelines subtly disagree. The FTC states that no specific wording is required, but that the relationship between blogger and brand should be clear. So you don’t need to disclose how much you were paid, just that you were compensated. Something along the lines of “Company X gave me this backpack and I love it!” or “Company Y compensated me to attend this event.”

The ASC, however, requires a greater level of detail, stating that: “Influencers should state the nature of the material connection (i.e. free products, monetary compensation, an exclusive invite to an event), which brand gave them, and which specific product they’re promoting.”

To stay on the safe side, the more specific the disclosure, the better. “Thank you to XYZ Company,” is not specific enough.

It’s worth noting that the FTC says the bloggers must also disclose affiliate links.

There is no hard and fast rule but agencies suggest that the disclosure should be placed close to the content they are related to. ASC suggests the disclosure would be best before the place or product is first mentioned (ie at the top of the blog post). In general, though, any disclosure in the post is better than none. 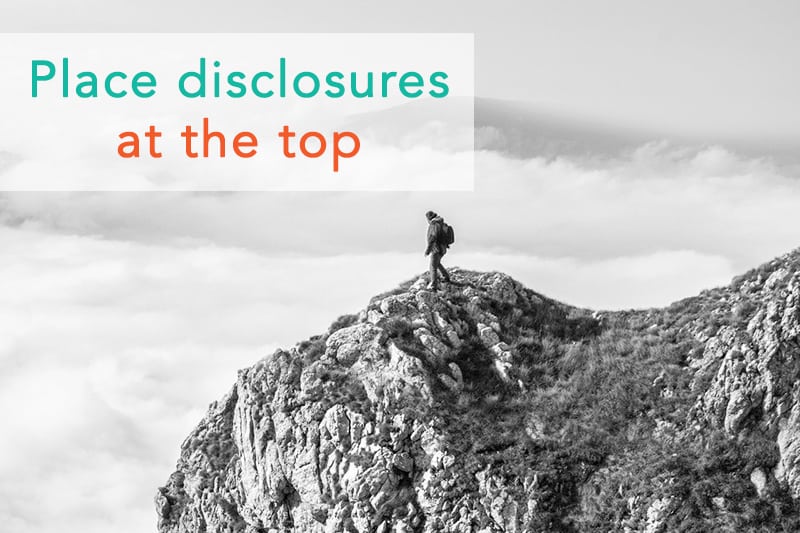 This is what the bulk of the guidelines address, and where the issue of disclosure can become somewhat thorny as you balance quality with transparency.

First up, just like with blog posts, the FTC and ASC both would like to see a disclosure for every brand mention. That means every tweet, every Facebook post, every video on YouTube. It’s simply not enough for the influencer to put a disclosure in their bio or at the beginning of a stream of posts, because someone viewing an individual tweet or photo might not see the disclosure. ASC, however, only requires a single disclosure at the beginning of a series of Instagram Stories or Snaps if they are meant to be consumed collectively. For multiple independent uploads, each needs to have its own disclosure.

Again, it’s not enough to simply say “Thank you XYZ Company,” as this does not fully explain the relationship between brand and influencer.

One of the easiest ways to disclose is via hashtag. Unfortunately, it’s simply not enough to use a branded hashtag, as both agencies are very particular with what counts as a disclosure.
The following do not qualify as a full disclosure according to the FTC and ASC:

The following are specifically approved as appropriate disclosure hashtags:

Branded hashtags are a bit of a gray area. ASC Specifically warns against using brand generated hashtags, while the FTC is ok with hashtags that make the relationship clear like #XYZComp_Ambassador or XYZPartner.

If you’re running a contest on social media that requires entrants to tweet or post on social media, the FTC would prefer that each entry be disclosed. They recommend using the hashtag #contest or #sweepstakes. 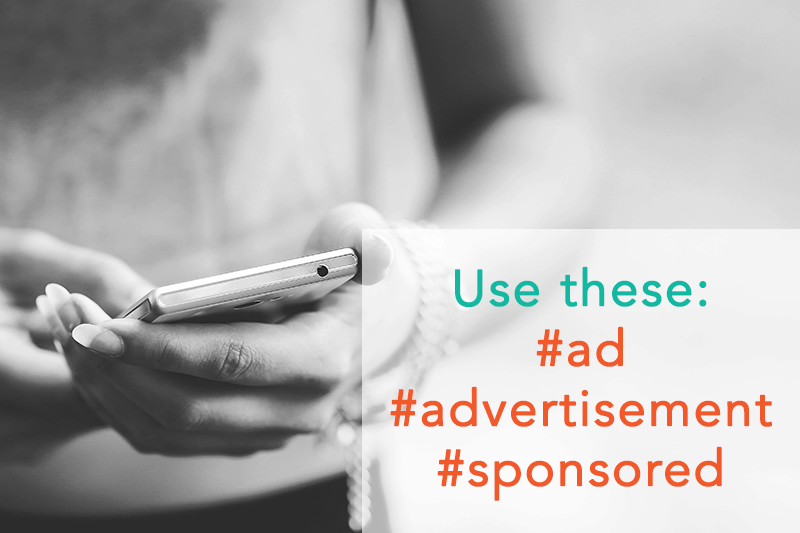 Videos are a very effective tool of influencers, and the agencies know this. Their key concern is that anyone who watches even just part of a video, still knows that they are watching branded content.

For this reason, the FTC recommends multiple disclosures – at the beginning of the video and then again throughout the video. The ASC goes one further and suggests that the disclosure should also be presented in writing in case the video is played without sound. On YouTube that would mean in the description section. On Snapchat, Instagram or Facebook live videos this would mean via text superimposed on the video.

How Liable are Brands?

Brands obviously have limited control of the actions of the influencers they work with. You can request, or even attempt to require, that bloggers stay FTC compliant, but you can’t force them to properly disclose.

So what is your responsibility? The FTC states that “Advertisers need to have reasonable programs in place to train and monitor members of their network.” You need to give your influencers correct information and clear instructions. You also need to keep an eye on what they’re doing. If they are not disclosing correctly, then you have a responsibility to try to correct them.

If you have contracted your influencer program out to a PR firm, it is still your responsibility to know what is going on. The ASC says “There’s a shared burden that falls on any agency, PR firm or company responsible for facilitating the sponsorship—in addition to the brand advertiser and influencers involved.”

If you try to correct a problem but the influencer ignores you, you are pretty much off the hook, as long as you maintain a paper trail. “However, if an influencer refuses to listen and is dismissed, the FTC acknowledged the brand will have done all it can do in that circumstance.” ~ FTC Twitter Chat

The FTC has admitted that they are not actively monitoring bloggers for violations, but they will evaluate concerns that come to their attention on a case by case basis. FTC is unlikely to go after you unless your sins are particularly egregious or are reported to them. 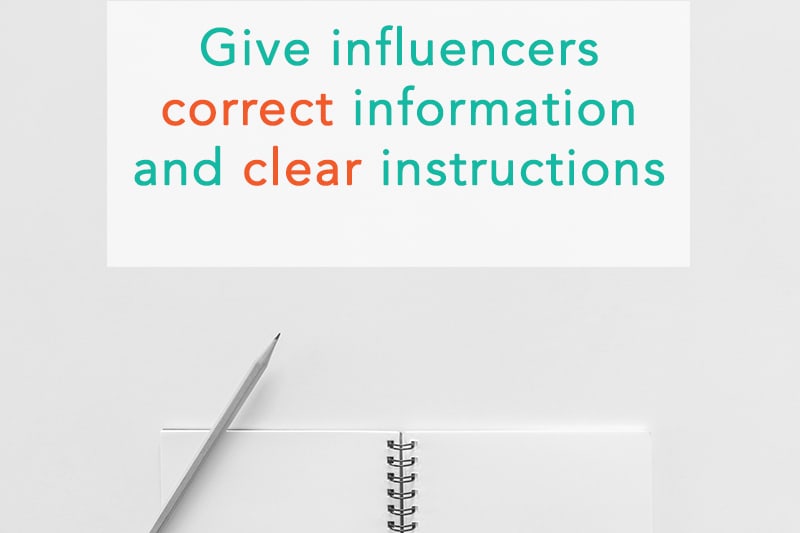 Now that you know the guidelines, the real challenge begins: helping influencers to maintain a unique and authentic voice while still toeing the line legally. This is a struggle for influencers as well, “Maintaining your voice and integrity, all while attempting to earn income from your platforms, can be like doing a dance you don’t quite know the steps to.” – Influencer Oneika Raymond in this post

It’s up to you to decide how to handle the FTC guidelines, in partnership with the influencers you work with.

The best way to start the discussion is by tackling the topic at the same time you’re going through all the other aspects of the deal you are making. Ask influencers how they normally handle disclosure, and what hashtags they like to use. What is their audience used to seeing from them?

That’s a good way to start the conversation, and then tweak your agreement based on your specific requirements. Make sure that somewhere in your correspondence (or contract, if you have one, which you should), that you make it clear that you expect the guidelines be followed.

Don’t look at disclosure requirements as a burden, but as a way for you and the influencer to push yourselves creatively. A clever and well placed disclosure can build confidence in both your brand and the influencer (and the lack of one can potentially backfire and make you look scammy). Encourage influencers to use their voice and make posts their own, while still clearly disclosing. For example, “Don’t be sad, this is an #ad, but it’s still super rad.” (Well, we hope you can do better than that one.) 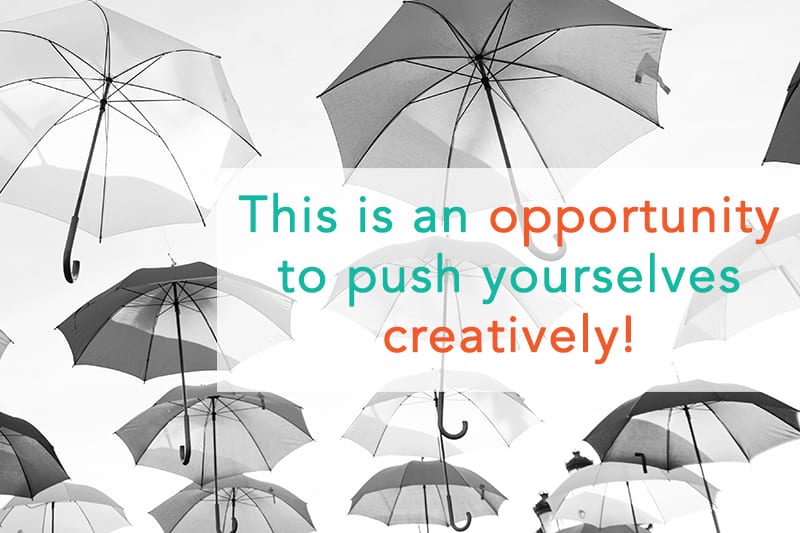 Here are a few resources for further reading on the legal requirements by both organizations:

Note that this article was NOT written by a lawyer and if you have specific questions regarding your own legality, please refer them to your counsel.

We’re here to help you navigate the murky waters of influencer marketing. Have any further questions? Send us an email!

Get Onboard! A Guide To Pinterest For Travel Brands